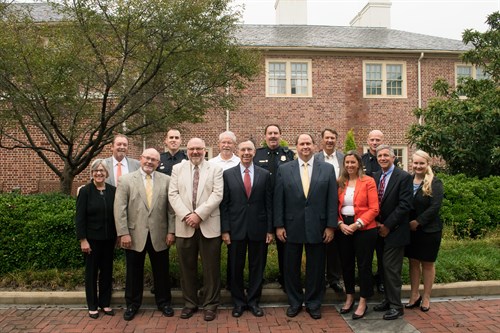 On October 12, 2017, the Williamsburg Health Foundation presented its annual award for 2017 to the Colonial Area Crisis Intervention Team, a public-private partnership that includes nearly 20 collaborating organizations led by Colonial Behavioral Health.  The Crisis Intervention Team, or CIT, as it is known to its members, includes all local law enforcement agencies from Williamsburg, James City, York and Poquoson as well as mental health advocates and professionals, Riverside Doctors’ Hospital and others.

“Together, members of our area’s crisis intervention team have changed the way in which someone experiencing a mental health crisis is encountered, understood, and treated,” said Jeanne Zeidler, President and CEO of the Williamsburg Health Foundation.

The problem addressed by the Colonial Area CIT is one faced nationwide. According to Eastern State Hospital’s Dr. Kristen Hudacek, “As psychiatric institutions have reduced their bed capacity, persons with mental illness have ended up in jail.  Jails have become the de facto mental health system.”   This isn’t just a problem in Williamsburg, but throughout the US.  According to the Treatment Advocacy Center, “Individuals with psychiatric diseases like schizophrenia and bipolar disorder are 10 times more likely to be in a jail or prison than a hospital bed.’”

One way to stem the tide of individuals with serious mental illness spending time in jail, is to change how law-enforcement officers and other first responders manage encounters with individuals suffering a mental health crisis.

In the three years since the Crisis Intervention Team Assessment Center opened at Riverside Doctors Hospital, its team has managed over 1800 crisis interventions, helping those individuals engage in appropriate treatment rather than become unnecessarily involved in the criminal justice system.

Al Boswell of Colonial Behavioral Health explains, CIT training with law enforcement “has really increased the partnership between the mental health community and law enforcement. We get to start the relationship at the CIT class.  We get to know the officers, and they get to know us.”

“The collaborative effort that is the Crisis Intervention Team proves that meaningful change - for both individual lives and the systems in our community - happens when groups come together and work together,” said Zeidler.

Coe continues, “CIT creates training, awareness and alternatives to treat people like the citizens they are.”

Groups working together to make a difference for people with serious mental illness through the CIT include: