Understanding the Link Among Animal Abuse, Child Abuse, Elder Abuse and Domestic Violence: The Problem, The Facts, and The Importance

Domestic Violence Awareness Month causes the media to inundated viewers with facts and figures about the impact of violent relationships. All too often, we fail to recognize that the American family has changed and shifted over the years, which has implications for the definition of family violence, how to recognize it, and how agencies need to work together for prevention and service provision.

The New American Family: Did You Know?

It is important to recognize that the animal-human dynamic has changed in modern society and that pets are now more than ever considered members of the family, with powerful influences on people's emotions. Dogs and cats are no longer just animals to be kept outside as occasional entertainment, pest control, or protection. In a nutshell: pets in America are important household members and often provide irreplaceable emotional support to singles, families, and children. As such, how an animal is treated within a family can have a powerful emotional impact on the other family members, but can also be a significant indicator of dysfunction within the family unit.

A New Understanding of Family Violence

Family violence is a matter of power and control. Often, the choice of victim is opportunistic. Whenever one member of the family is abused, all others in the family are at risk.

For many years, the focus on family violence has been on domestic violence, and rightfully so. Violence between intimate partners is complex and multi-faceted, often including verbal abuse, financial constrictions, isolation from family and friends, sexual violence, and physical assault - all devastating. Underlying all of this is one guiding desire by the abusing partner: CONTROL. Once advocates, social workers, medical providers and others realized this very important element, it opened eyes to exploring family violence in a whole new way: If one partner (sometimes called "the batterer or abuser") controls one person in the household or family, is it possible that s/he also uses the same controlling techniques against others within the household/family? We know that many households also include children, animals, and aging parents…. Thus, the exploration of the many links between intimate partner violence (domestic violence), elder abuse, child abuse, and animal abuse began. 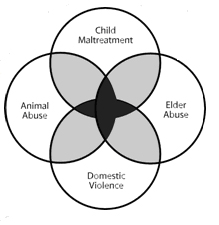 Abusers often strike out in more ways than one, and against more individuals than one, creating an overlap among child maltreatment, animal abuse, elder neglect and abuse, and domestic violence cases.

The Evidence
Researchers in such fields as psychology, child development, sociology, criminology, social work, law and veterinary medicine are addressing the multi-disciplinary nature of animal abuse and family violence. Many studies indicate that animal maltreatment is part of a complex constellation of family violence. Key findings indicate:

There are links between child abuse and animal abuse:

There are links between domestic violence and animal abuse:

Threats to pets often prevent women and children from leaving situations of domestic violence and sexual abuse. It should come as no surprise that 55 percent of domestic violence victims and their children report that their pets are very important sources of emotional support, thus violence toward pets is especially devastating and viewed as another form of family violence.

There are links between abuse of the elderly or persons with disabilities and abuse of animals:

Like all family violence victims who can be controlled by love and concern for a pet, seniors and persons with disabilities are also vulnerable. They may be less willing to leave an abusive or dangerous home situation to go to managed care due to concerns about what may happen to a pet that is left behind. They may also be especially silenced by threats to harm or kill a beloved pet.

There are links between family abuse and pet aggression:

This suggests that animals may attempt to intervene in family disputes or physical altercations, or perhaps the animal is fighting back when used as pawns in power struggles. While there could be a possibility that the abused or violence-exposed animal may also be experiencing trauma, the emotional impact of family violence on pets has not yet been fully explored.

Social scientists and law enforcement agencies have begun to examine cruelty to animals as a serious human problem closely linked to domestic violence, child abuse, elder abuse, and other violent crimes. [These efforts] cannot undo generations of abuse, but they can be an effective means of breaking the cycle of family violence from one generation to the next.
- International Association of Chiefs of Police

Society is beginning to understand how devastating partner violence is to the well-being of the victim and his/her children. Yet, given the importance of pets within the family system, and the newly-recognized connections between animal abuse and family violence, it is important also to point out the significance of animal maltreatment as negatively impacting child development and the foundation of healthy relationships.

Recognizing the interrelationships among intimate partner violence, child abuse, elder abuse, and animal abuse give professionals POWER - power to have more routes to intervene within the lives of our most vulnerable citizens - to offer services, support, and when necessary, enforce the law.

The key is to know the signs of control and abuse. And, even more importantly, for the agencies that serve these vulnerable populations to work together. To achieve this, it is essential that arrangements for communication and cooperation between relevant statutory and voluntary organizations be developed and enhanced. Everyone must work together.

From starting "safe haven" community foster care programs that house pets of family violence victims to simply speaking out when you see an animal or person assaulted, we all have the power to change a life. Take the time to make a difference---not just in October, but anytime you see an injustice. You never know when your action might save a life.

Carol Wilson has been employed by the York-Poquoson Victim-Witness Assistance Program since 1996, and the director of the program since 2002.  She is a Credentialed Advanced Victim Advocate through the National Organization for Victim Assistance's National Advocate Credentialing Program, and certified in Critical Incident Stress Management (CISM) Peer and Group Crisis Intervention through theInternational Critical Incident Stress Foundation.She currently sits on the York-Poquoson Child Advocacy Team, the Colonial Area Intimate Partner and Family Violence Fatality Review Team, and is the Team Coordinator for the York County Violence Against Women Task Force.